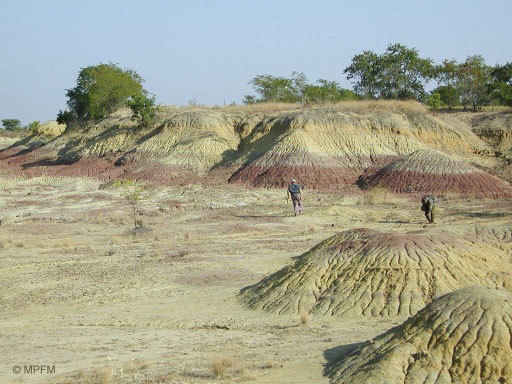 In the current early edition of the journal PNAS a new paper raises a suggestion that the common primate ancestor originated in Asia and not Africa through the discovery of a new species. This new 37-million-year-old fossil was discovered in the Pondaung sediment at Thamingyauk locality in Myanmar.

The species has been named Afrasia djijidae based upon 4 teeth recovered from the site. Afrasia pays homage to the ancestry of these early anthropoids who are now found intercontinentally, between Africa and Asia. And djijidae refers to memory of a young girl from village of Mogaung in central Myanmar. In comparing the teeth to other primates an remarkable discovery was made…

Afrasia‘s teeth closely resemble those of the 38-million-year-old Afrotarsius libycus. The shape of the Asian Afrasia and the North African Afrotarsius fossils shows both species survived off insects and weighed around 100 grams or so, about size of a modern tarsier. A. libycus was recently discovered in the Sahara, where it was more ecologically diverse and suggesting that they actually originated elsewhere. The close similarity in dentition between Afrasia and Afrotarsius raises the possibility that early anthropoids colonized Africa from Asia.

A open question that remains is just how was Africa colonized from Asia? Around 38-37 million years ago the Tethys Sea separated the two continents. The authors write how the primates could have island hopped by swimming and using logs as rafts. I think this is an outlandish idea. But they supplement this hypothesis by stating how such as Asian rodents and extinct piglike animals known as anthracotheres colonized Africa.

Another open question is how come the Afrasia species and other ancestral primates did not lead way to their lineage of primates, much like the African counter parts? The authors address this question by stating that a glacial event 34 million years ago, dramatically cooled the climate. This drop in temperature affected Asia more than Africa, leading to the disappearance of Asian anthropods. And for anthropoids like gibbons and orangutans in Asia now, such as gibbons and orangutans immigrated from Africa some 20 million years ago.