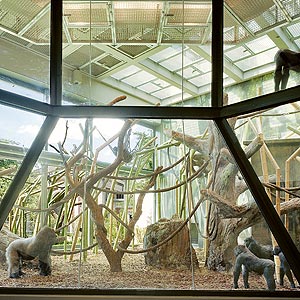 An insightful paper published by Ross et al. (2010), compares zoo-living ape behavior inside their holding and exhibit areas in Lincoln Park Zoo, an accredited member of Association for Zoos and Aquarium (AZA). Zoo animals usually have at least two areas where they are housed (excluding some aquatic animals): the holding area and the exhibit area. During visiting hours and at night, zoo animals are housed in their exhibit area. In the morning, before the zoo opens, they move into the holding area to receive husbandry care and their morning food ration.

The gorilla exhibit area in Lincoln Park Zoo. Photo from Things You Should Do.

One of the chimpanzee from the study, Kipper (now deceased), from Lincoln Park Zoo interacting with a child. Photo by Chicago Tribute.

Seven gorillas (2 males, 5 females; N = 7) and seven chimpanzees (3 males, 4 females; N = 7) were observed in this study. I should point out that the authors of the study is by no means criticizing Lincoln Park Zoo. It is an informal observation of behavioral changes for these animals in different environment. The result of the study shows that:

Gorillas
Inside the holding area – Increased locomotion and affiliative behavior. Also showed increased rates of aggression, self-directed behavior (subject touches, manipulates or examines the body, skin, or hair) and solitary play. Were in close proximity with each other.

Inside the exhibit area – Increased feeding and foraging behavior and also sexual behavior.

Chimpanzees
Inside the holding area – Increased aggression. Increased rate of scratching and self directed behavior (subject touches, manipulates or examines the body, skin, or hair). Were in close proximity with each other.

Inside the exhibit area – Increased feeding and foraging behavior. 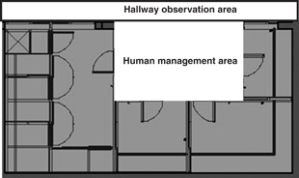 Both gorillas and chimpanzees showed increased aggression accompanied with self directed behavior when inside holding area. Increase in aggression can sometimes be attributed to overcrowding and self directed behavior generally means that an animal is nervous. Being constrained in a smaller space increases the chance of mixed-sex and mixed-dominance encounters thus resulting in agonistic and submissive observations. When inside exhibit areas, both apes exhibited an increase in feeding and foraging behavior. This presumably is due to their feeding and foraging habit in the exhibit area. If I remember correctly, one of the major breakthrough in exhibiting apes (and most animals) is to encourage foraging behavior throughout the day. It is no surprise that these apes exhibit these behaviors. 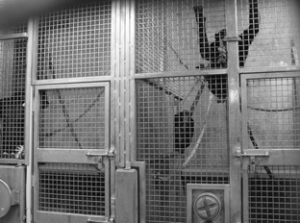 Chimpanzee subjects in a single enclosure in a holding area suite, during a period of free access (following training and research protocols). Photograph was taken from the central caretaker area. (Ross et al., 2010)

These apes reacted differently when inside their holding area than in their exhibit area because they are exposed to different sensory. Apart from the difference in size and complexity, these two areas also differ in the degree of human interaction, cross-species presence, environmental factors and time spent between these two areas. An understanding of these differences and motivational factors is important in promoting optimized environments for captive apes. The authors encourage that zoos would consider species-specific functional, physical and social preferences when designing enclosures for apes regardless of frequency of use.

Originally posted on The Prancing Papio.

2 thoughts on “Ape behavior inside the exhibit and holding area”