The collective understanding of Miocene African primate evolution, especially ape evolution, is generally unfounded. Why? Because the fossil record is spotty, there are only a handful of primates from the Miocene. The Miocene lasted from 23.8 to 5.3 million years ago, and a lot of interesting things happened in the ape lineage during that time. The molecular evidence tells us that gorillas diverged about 10 to 8 million years ago, and chimpanzees as early as 5 million years ago. But because we don’t have many fossils from that period, it’s hard to see what these apes looked like during this period. 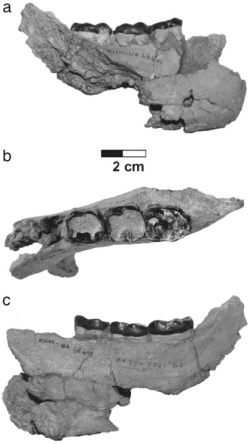 Suffice to say, it is always welcoming to read of a new publication announcing a new Miocene ape. We’ve had the pleasure to do so, with the introduction of Nakalipithecus nakayamai, a Miocene Ape from Kenya. PNAS is carrying the paper now, under the title, “A new Late Miocene great ape from Kenya and its implications for the origins of African great apes and humans.” The paper is written by both Japanese and Kenyan academics.The fossils of N. nakayamai were found over a decade ago in a fossil bed called Nakali, which is about 40 kilometers west of Maralal. These fossils make up the holotype of the species, which is the scientific way of saying this is the type specimen. A total of 11 fossils make up this specimen, including a right mandibular fragment with M1–M3, left I1, right C*, right P3, left P4, right M1, right I2, left P3, right P4, right M, left M, and a left dp.

As you can see, these are all teeth. Teeth are especially important in understanding evolution because they offer more resolution of information than other parts of the skeleton.

The teeth are similar in size to modern orangutans and gorillas, some of the larger great apes. The teeth differ from other known species of apes in having a much different upper canine. I’m not gonna rehash how it’s different because it requires an intimate understanding of tooth anatomy, morphology, and terminology. Just take my word for it, it’s a much different canine, as long as it is broad. Have a look for yourself, 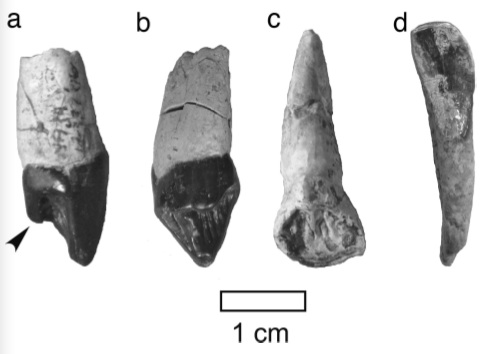 The premolars are also different. They are elongated but have reduced cusps.The authors indicate that N. nakayamai is similar to another genus of Miocene ape, Ouranopithecus. However, the differences from Ouranopithecus are in thinner enamel and less inflated cusps in the molars. The authors compare the fossils to other Miocene apes,

Other than Samburupithecus kiptalami, there aren’t many mid-Miocene apes from Africa known at this time. There is a relatively larger number of Miocene ape fossils found from Turkey and Greece, which has gotten a lot of people, ahem David Begun, to think that apes made a rendezvous out of Africa and into what is now the Middle East and parts of Europe. With this new genus and species, Nakalipithecus, we now see that at least three diverse species of non-cercopithecoid catarrhines survived through the Middle to Late Miocene in Africa, and that suggests a less likelihood that hominoid primates were absent from Africa and were reintroduced from Eurasian populations.