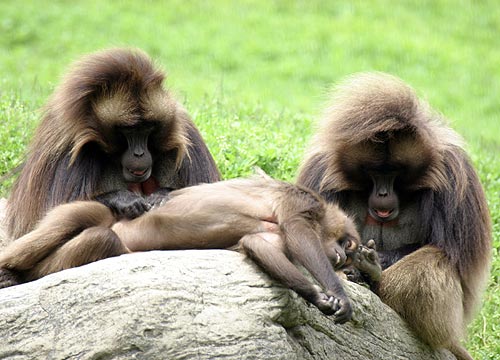 When I first saw this beautiful image of geladas, I thought it was two males mourning a dead comrade. But after reading the caption, boy was I ever wrong. What’s happening here is grooming. I wanted to share this photo with you because grooming is one of the most common behavioral features between all primates, and has made us all into the highly social organisms we are.

“Like other intelligent, highly social primates, baboon courtship can take many different forms. In hamadryas baboons, for instance, males will maintain harems of multiple females which they will jealously guard—and which will occasionally be raided by other males. Males of other baboon species sometimes take a different tack: by “befriending” a female through attentive companionship and grooming (the primate equivalent of sparkling conversation) they may eventually be chosen as mates by those females.”