I want to take some time off from all the upsetting ecology and primatology news, and change the pace and tone by sharing with you two rather enlightening cognition/behavior/evolutionary psychology publications that (will) appear in upcoming issues of Cognition and Journal of Comparative Psychology. 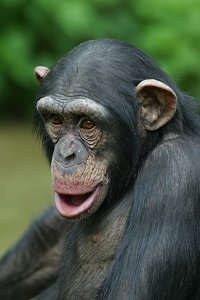 Both these papers come from psychologists over at Max Planck Institute for Evolutionary Anthropology‘s Hominoid Psychology Research Group who have tested a common hypothesis that chimpanzees are in tune enough with one another’s behaviors, even our own, to predict actions by figuring out what we see and hear… in effect they psychologically tested chimps for their capacity to deal with sneakiness and their own inherent sneakiness.

One of the authors of the paper, Vanessa Woods, who has a very nice personal website with an awesome video summarizing her research, tells us of one such tactic that chimps employ to understand/be aware of others’ perceptions: gaze following, something that young human children also use, “chimpanzees look in the direction someone else is looking and predict future behaviour based on that.”

The experimental setup of their study involved a set of two experiments to test. Where, first, they sough to find out if,

The ‘other’ in this case was a human sitting in a booth with a window, like one a ticket seller would use.

Holes at the sides of the booth allowed chimps to snatch food, which the person would often grab, as though in competition with the animal.”

Woods et al. observed from the initial series of experiments that,

“the chimps did everything from hiding behind barriers to doing a bit of Academy Awards-worthy acting to get the food.

For the latter, they would back away from the food and the person, as though they were not interested. They would then crouch down, sneak away to the side and then snatch the food.

For the second series of experiments, the researchers gave the chimps a choice between sticking their hands through opaque or clear tubes to grab food.

The primates always chose the opaque tube, until the scientists made it so that the tube emitted a loud noise whenever the chimps stuck a hand in it. The chimps would then try to deceive the human again, before reaching through the silent tube for their food reward.”

This work is very insightful. It provides us with evidence and a behavioral foundation or minima, to understand human cognition. We can track how a evolutionary relative to us, like chimpanzees, contemplate intentional plans for the future… and injects some deception, based on their knowledge of what others can and cannot see and hear. These results, as Marc Hauser, director of Harvard University‘s Cognitive Evolution Laboratory, is quoted saying,

“all add to the growing knowledge that animals seem to have far greater awareness of what others know than we had previously anticipated.”

I don’t have the links to the publications, since they don’t seem to be published on-line as of yet. So you’re gonna have to wait on getting the first hand account. In the mean time, I got most of the information from here, “Chimps really are cheeky monkeys,” whose author also wrote this.

3 thoughts on “On chimpanzee impudence”