Again, many thanks to Betsy, who sent me a copy of the Science article over-viewing some of the ethics and current debate topics about the use of chimpanzees in biomedical research in the United States.

The topic and scope of this piece is very poignant, it tackles two critical and morally charged topics in our lives: ecology and conservation versus public (human) health and biomedical research. The author successfully outlined many of the pros and cons behind both sides of the debate. I did appreciate what the article addressed, however it was a bit jumpy in organization. I will do my best to organize it in a more clear manner.

As that article points out, currently the United States of America is the only nation that continues to use chimpanzees for biomedical research. The last nation to use chimps, Japan, stopped using them in October of 2006… so it isn’t like the US is the only one that has been doing this for a long time. Over the last 100 years, chimps have proven to be a remarkable model organism to use for this type of research, one such example is the use of chimpanzee were critical in developing a novel vaccine for hepatitis B, a very lethal virus that has infected over 2 billion people. Their continued use in biomedical research has focused on developing a HIV vaccine, an equally devastating disease.

But, the future of HIV research, or other research dependent on chimpanzees as a model system is in jeopardy. The NIH, or National Institutes of Health, is the main supporter of biomedical research with use of chimpanzees. However, it has imposed a moratorium or ban on further breeding of chimps used in federally supported research. This has currently caused a significant drop in the number of chimps available for research, nearly 400 less chimps in the last ten years. A smaller supply of chimps creates a dramatic strain on the success and thoroughness of biomedical research. Furthermore, anyone with any background in genetics, would know a larger and more diverse population of breeding animals creates more healthy offspring. Of the remaining 1,000 chimps only 200 females are capable of breeding. This is the one main issue many proponents of biomedical research are concerned about, with fewer number of chimps available, their current and future research will be severely impacted… ultimately threatening the future of human health. 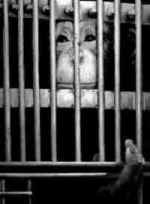 The NIH has imposed a ban on future breeding of chimps because a subdivision of the institution determined that a smaller population is more fiscally maintainable, and not because of the ethics and morals of using chimpanzees in biomedical research. But that hasn’t hampered the campaigns against this aspect of research. Someone who uses chimps and monkeys in biomedical research, specifically AIDS research, Jonathan Allan, of the Southwest National Primate Research Center in San Antonio, Texas summarizes the ethical catch 22 one must make,

“You shouldn’t be comfortable with [this type of research]. You should have to search your soul as to the balance between the research and the good that comes from it and the bad part, which is what happens to the animals. It’s a difficult place to be. If you’re comfortable with it and you don’t have any problem with it, that’s a problem.”

Norman Letvin, an immunologist at the Beth Israel Deaconess Medical Center has also done AIDS vaccine experiments with chimpanzees and monkeys. He further comments on finding a clearly established set of rules and compromises that appease to ethical concerns as well as accomplishing successful research,

“These kinds of discussions need to be focused on very specific questions about a particular study.” Letvin no longer experiments on chimps and says he can’t see any compelling reason today to use large numbers of them for biomedical research. But he stresses, as do many other investigators, that this animal model has led to “enormously valuable” medical advances in the past and may well in the future.”

The crux of the campaign against using chimpanzees in biomedical research lie on several different foundations. Primarily, there is a large concern that this endangered species is disappearing from its natural ecosystem at an alarming rate. Most people would rather see efforts be made in conserving the species rather than infecting them with lethal pathogens and dosing them on drugs. I side to this issue just as much, if not more, than the use of them in biomedical research. Secondarily, as most of you may know, chimps are our closest living relatives. Genetically they are remarkably similar to us, and behavioral research has also shown that they have complex personalities, incredible intelligence, and a depth of familial relations that rival our own. To subjugate this keen species to invasive research that affects their lives in such deleterious manners is torturous.

Should the moratorium on chimp breeding be lifted, then as the article points out, that puts a burden on Chimp Haven and other non-profit chimpanzee rescue centers to support the ‘used’ chimpanzees. This draws a fine line in over what to do. It seems like both we as humans and they as chimps are screwed either way… Have we become so insensetive that we disregard our distant evolutionary cousins as if they were biological trash? If we do continue to use chimpanzees then how will we support them, and can we find an ethical common ground? UCSD’s Varki, Gagneux, and primatologist James J. Moore offer an interesting suggestion. They advocate in a 2005 commentary in Nature, titled, “The ethics of research on great apes,” “that chimpanzees should be used only in experiments that could also be done ethically in humans. That would rule out vaccine studies that intentionally infect animals with potentially harmful viruses, for instance.”

I would like to see researchers drop relying on chimpanzees for any type of invasive research, be it biomedical or psychological… we should focus our efforts in creating alternatives, such as supporting the Virtual Cell or other situations where the lab animals do not endure suffrage. We do have the technology to simulate diseases, and can focus on developing complex computer models that can figure out all the possibilities. Why don’t we do that? …Something to ponder about.

Some related and useful links on the history and campaign againt chimpanzees in biomedical research: